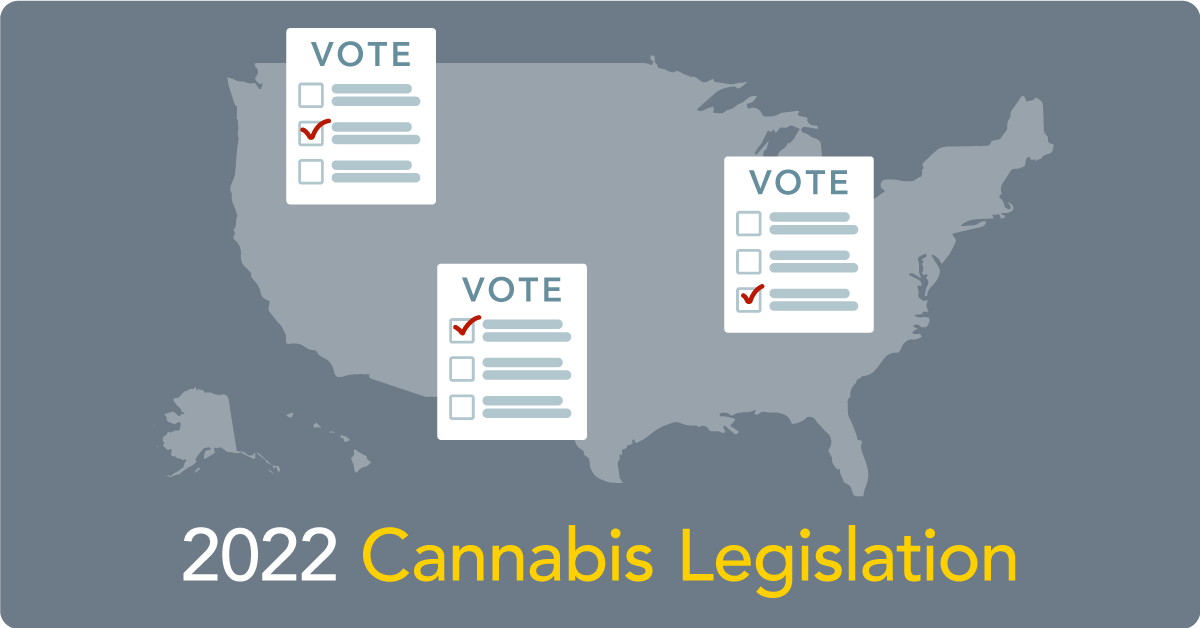 Legalization 2022: What Did Voters Say About Cannabis?

The end of 2022 is fast approaching, and another memorable election season is behind us. While these election results determined a number of far-reaching decisions, we know what our readers really want to know: What did voters say about cannabis?

Cannabis legalization initiatives were on the ballot in five states. Efforts were rejected in Arkansas, North Dakota, and South Dakota, but voters in Maryland and Missouri showed their support at the polls.

In Missouri, the marijuana legalization ballot question passed with 53% of the vote. Within two days, draft regulations were released and made available for public comment. According to the proposed timeline, recreational sales can begin as early as February 2023.

Maryland passed its cannabis legalization referendum with more than 66% of voters in favor. Legislators were already working behind the scenes in anticipation of a vote in favor of legalization, so this came as no big surprise. The referendum language says that cannabis use can begin on or after July 1, 2023.

Of the states lacking enough votes to pass potential legislation, South Dakota may be the most interesting. You may remember voters passed a measure in 2020, only to be overturned by the courts thereafter. Despite voter approval just two short years ago, the ballot question failed with 53% of voters against legalization efforts.

While not all states saw cannabis-related initiatives on the ballot this year, voters shouldn’t assume the evolutionary nature of cannabis law is stalled.

You may remember Kentucky Governor Andy Beshear creating the Kentucky Medical Cannabis Advisory Committee earlier in 2022 when the state’s legalization bill did not receive the support needed to advance. In an effort to support patient access, Beshear has now signed an executive order allowing patients to possess up to eight ounces of medical marijuana if obtained legally from other states. The law, which goes into effect on January 1, 2023, protects patients from prosecution in Kentucky as they seek treatment for a qualified illness.

Impacts from the polls can be felt beyond direct votes for or against legalization measures. In Minnesota, for example, Governor Tim Walz commented he believes cannabis legalization will pass in 2023 now that Democrats have control of the state legislature. Similarly, Pennsylvania may be more likely to legalize with Democrats now having the majority in the House of Representatives.

While states are barreling ahead with cannabis legalization, the federal government is slow to make similar changes. This tension has historically been one of the most confusing elements of determining how to best address the changing legal landscape, considering we are taught under the Constitution that Federal law trumps state law. However, this issue has not gone unrecognized by the Biden administration, and while no major changes have occurred, we have seen efforts to address some cannabis-related concerns.

In October, President Biden laid out his plan to correct what he calls a “failed approach to addressing marijuana.”1 His plan includes pardoning prior federal offenses for simple marijuana possession,2 an act intended to give prior offenders improved access to employment, housing, and educational opportunities. He also recommended that governors follow suit by pardoning cannabis possession offenses in violation of state law. And in what may be an even more impactful move, President Biden asked Xavier Becerra, Secretary of the Department of Health and Human Services, in conjunction with the Attorney General, to initiate a review of the scheduling of cannabis under federal law. Currently, cannabis is a Schedule I drug under federal law, defined as a drug “with no currently accepted medical use and a high potential for abuse” by the Drug Enforcement Administration. Other Schedule I drugs include heroin, LSD, ecstasy, and methaqualone.

Further, in mid-November, the U.S. Senate sent a cannabis research bill to the president’s desk. Notably, this is the first piece of marijuana reform legislation to ever be sent to a president for review. The “Medical Marijuana and Cannabidiol Research Expansion Act” would make it easier to conduct cannabis research, something the federal government has yet to undertake.

As more changes unfold, and state legalization initiatives move forward legislatively, it’s important for employers to stay in tune with relevant updates so they can make informed decisions about their workplace drug testing policies. On Tuesday, December 13, join me for a webinar recording, Understand Cannabis Laws Now – Make Informed Decisions Later, where I’ll discuss the impacts of the 2022 election and what they mean for employers struggling to navigate workplace drug testing in the era of cannabis legalization. I hope you can join me.