How Long Can Marijuana be Detected in Drug Tests?

The short answer is, it depends. Several drug testing methodologies exist today, and they all detect past usage of marijuana over different time frames. Before we delve deeper in the specifics, let’s first agree on what we mean by a detection window.

What is a drug detection window?

A drug detection window is simply the time during which a drug can be detected in a biological sample, such as blood, urine, oral fluids, or breath. What bookends the higher and lower bounds of drug detection times is a cutoff value for the test being performed. The cutoff level is set to optimize the detection of the drug while minimizing false positives. Drug levels below the cutoff mark will appear both before and after the detection window. 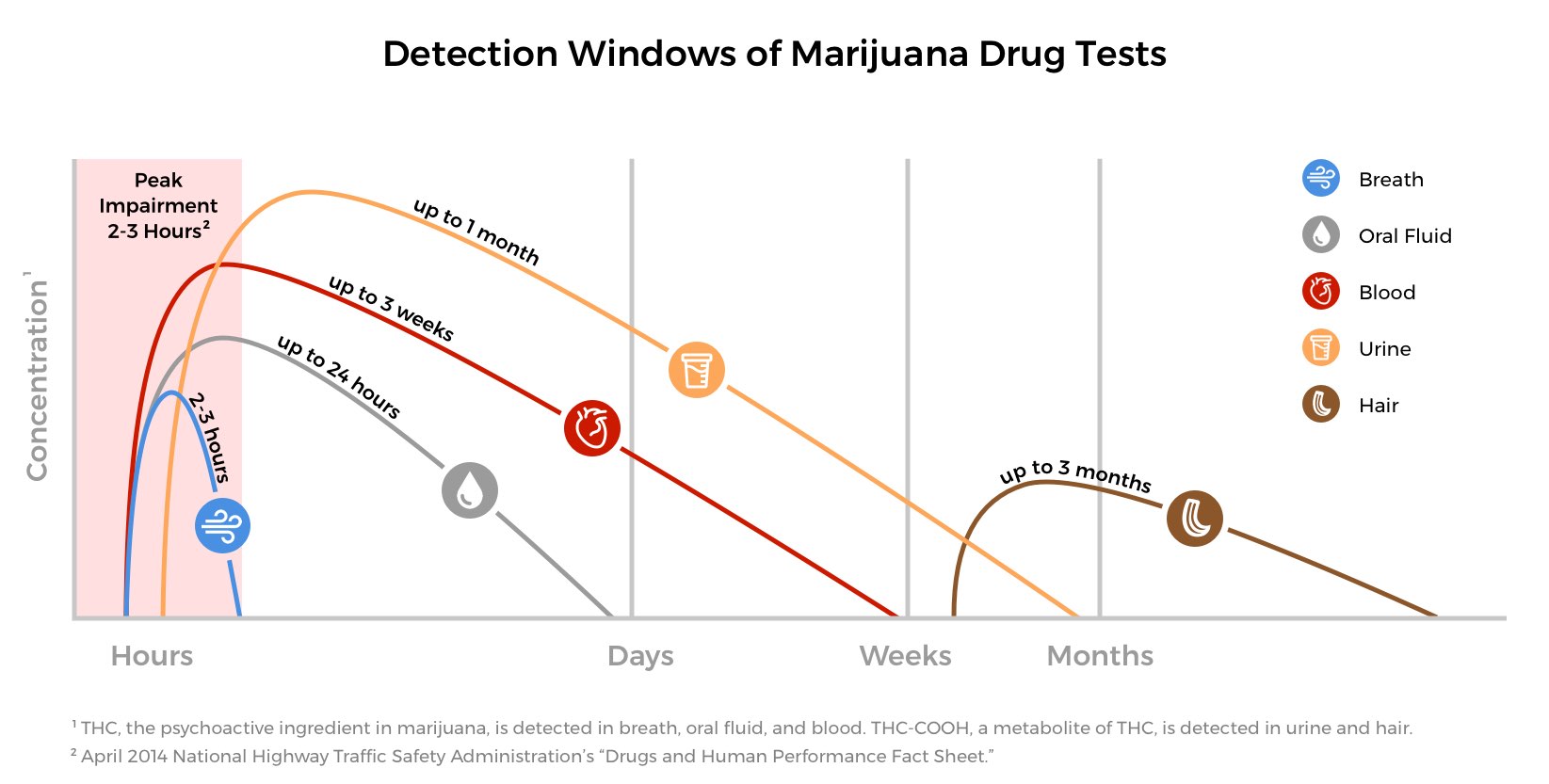 The detection window for marijuana varies depending on which type of drug test is used (see Figure 1). Urine is the most common type of drug test given.1 Its detection window for marijuana is up to 30 days.2 This is somewhat dependent on a variety of factors, including frequency of use.  An occasional smoker who uses marijuana a few days a month may have THC remain in his or her body for only a few days, whereas a chronic smoker who smokes daily may have traces of THC in his or her body for up to a month.3

The challenge with marijuana

THC, unlike alcohol and many other drugs, is highly fat-soluble, meaning it is stored in fat tissue. After being stored there, it is slowly released back into the rest of the body, and thus takes a long time before it’s eliminated from the body.7 That is why drug tests can detect THC or its metabolites long after someone is actually impaired by the substance. Depending on the bodily substance examined, THC or its inactive metabolites are eliminated at different rates and for varying durations. Let’s take a closer look at each type of drug test to better understand why this is.

Breath provides the shortest marijuana detection time of just a few hours due to the ways THC enters and then dissipates from the breath. THC re-enters the breath either through residual material in the lungs from smoking or from material transferred from the blood back into the air during breathing.

When marijuana is inhaled, THC goes into the lungs where most of it is quickly absorbed into the blood. It very quickly makes its way back from the bloodstream to the lungs where it is emitted in breath within minutes of smoking, and THC will be detectable in breath for up to 2 to 3 hours.

When marijuana is ingested, on the other hand, THC does not enter the bloodstream until it is digested in the stomach. As a result, the detection window for ingested marijuana is delayed and prolonged (i.e., the onset is later and the duration is longer). This delayed and protracted detection window corresponds to the “high” individuals feel after consuming edibles; they often do not feel the effects of marijuana until some time after they have eaten it, but then feel the lingering effects for many hours. In contrast, those who inhale marijuana smoke usually feel a nearly instantaneous but comparatively short-lived high.

THC in blood is measurable for up to 3 weeks.  After smoking, THC is rapidly absorbed through the lungs before entering the bloodstream.  (In the case of ingesting marijuana, THC first is digested in the stomach before entering the bloodstream, as mentioned above.) THC is then rapidly absorbed by tissues in the body where it remains for a long time. THC gradually is released from these tissues back into the bloodstream. The amount of residual THC found in blood in the days or weeks afterward is small compared to the amount immediately following usage. Nevertheless, THC levels are still detectable in blood for up to a few weeks,9 and blood tests cannot differentiate between recent and past use because the exact quantity of lingering THC differs due to a number of behavioral and physiological factors.

Hair tests generally have the longest detection window — up to 90 days after marijuana use.12 Similar to urine tests, hair tests don’t test for THC but instead test for the non-psychoactive THC metabolite THC-COOH. Unlike other tests, however, it takes 7 days for THC-COOH to show up on hair tests because metabolites first pass from the bloodstream to hair follicles.  Starting from the hair shaft, every centimeter of hair length equates to approximately a one-month detection window.13

What is the best drug testing method?

Once again, this depends. Each drug testing method may suit certain situations based on budget, testing environment, and the goal of the employer or law enforcement officer administering the test. If there is zero tolerance for marijuana use, then presumably drug tests that have longer detection windows are desirable.  However, if the goal is to determine recent use and whether someone is likely impaired at a particular time, then a breath test would be the best choice. A breath test has the shortest marijuana detection window and is the only drug testing technology that correlates with recent marijuana use and peak impairment.

9 How Long Does Marijuana Stay in Your System? How THC Blood Tests Work, and What You Should Know, Mic Network, Feb 21, 2017.

Driving While High: Its Prevalence, Misperceptions, and Impact

82% of Employers are Concerned about Marijuana Legalization

Testing drivers for cannabis is hard. Here’s why