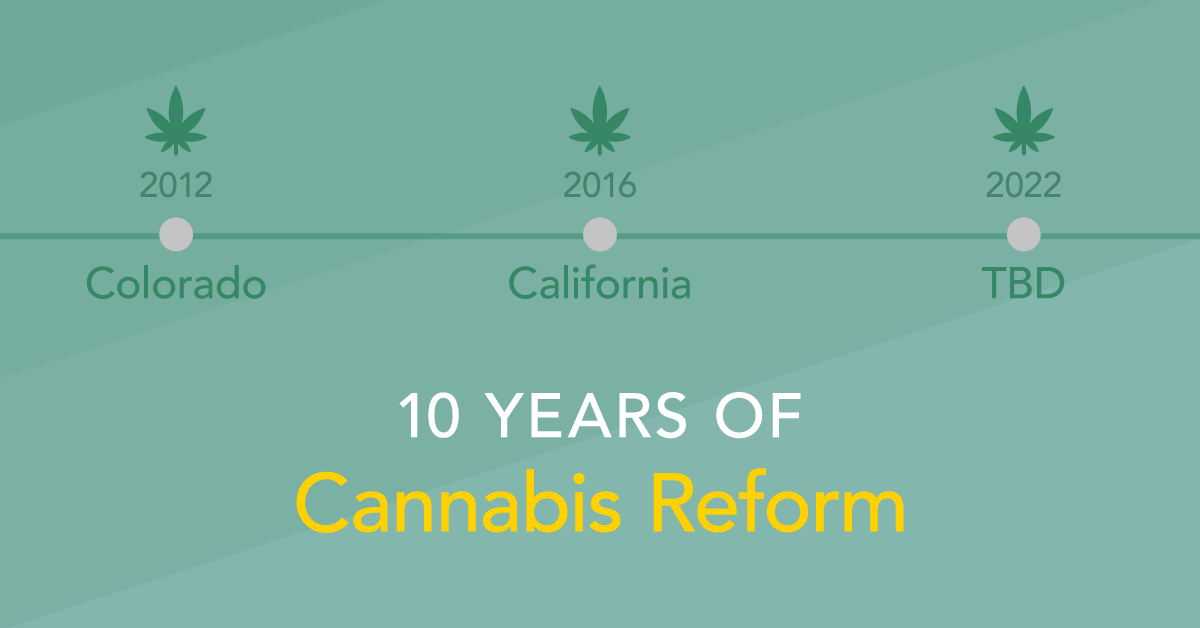 10 Years of Cannabis Reform: Where Do We Go Next?

Looking back a decade later, the lack of cannabis education continues to create serious risks and blind spots for employers, employees, and communities.

In December 2012, the state of Colorado officially added the legalization of recreational cannabis use to its state constitution1. It was a decision that had more than a ripple effect in the years to follow. Quite frankly, it was a decision that had an effect more akin to dropping a large rock into a bucket, causing all the water to splash over the sides onto the ground, the surroundings, and the people standing nearby. So, as we approach the 10th anniversary of that decision, I thought it was a good time to assess where we are now with cannabis reform and be intentional about what we should try to accomplish in the next decade. Hound Labs, Inc. does not take a stance on whether cannabis should or should not be legal, and I will not either.

This blog starts a year-long conversation leading up to the 10th anniversary of Colorado’s legalization of recreational cannabis use. I will write about various topics, interview industry experts, and invite a few guest authors to join in the conversation – including my colleagues to reflect on what has unfolded since 2012 and what they would like to see unfold by 2032. These conversations will primarily focus on the impact on employers and law enforcement but will take an occasional detour to explore some other topics.

The first topic of my 10-year retrospective series of blogs is how the choice to allow the legalization of both medical and recreational cannabis use without educating the population about its effects will continue to have unintended negative consequences. The lack of education continues to create serious risks for many individuals, including employers, employees, and everyone else in their communities.

When employees began using recreational cannabis, employers did not have the information to respond effectively. There were no employer education programs to teach them:

This lack of education continues in 2022. Employers want to make the right choices – they need to keep their employees, customers, and communities safe, but because they often do not have the knowledge they need, they continue to struggle with how to proceed.

Increasing access to legal cannabis coupled with a tight labor market further complicates a problematic situation. Most employers know they need to continue testing for cannabis or risk exposure to safety incidents and litigation. They want to retain highly qualified employees, but by continuing to rely on the cannabis tests developed prior to cannabis legalization workplace leaders risk positive results for employees who used outside of work, perhaps days or weeks ago.

Employers also have not been educated about how to evolve cannabis testing policies to reflect the new legal status of cannabis. Existing policies that prohibit the use of impairing substances, whether legal or illegal, can still be appropriate. Most employers prohibit the use of alcohol during work hours – the use of cannabis can also be prohibited during work hours. What needs to change is the type of test employers use to determine whether employees have used cannabis while working an 8- or 10-hour shift. The only way to screen for recent use is to test breath – all other cannabis tests (oral fluid, urine, hair) can return positive results for cannabis 48 hours or longer after use. Employers want to deter use on the job, not punish employees for their personal choices outside of work hours.

Employers also need to be educated that the foundation of effective drug testing programs is preventing use immediately before or during work hours. Prevention is crucial because it limits safety incidents that result from being under the influence. In most situations, employers do not have to determine whether employees are impaired each time they test; they just need to know whether their employees have violated company policies and used an impairing substance during work hours.

The fact that legislation occurred without education also created a myriad of issues for employees that continue today. As was the case with their employers, most employees do not know cannabis tests have long detection windows. This matters because although they may be using both legally and responsibly outside of work hours, they can still test positive for cannabis 48 hours from an oral fluid sample, weeks after use from a urine sample, and months after use in a hair sample. Employees would benefit from knowing breath testing means results focus on cannabis use only within a few hours of the test – not days, weeks, or months prior.

Unfortunately, the legalization of cannabis use did not come with an instruction manual. Employees were not informed they could lose their jobs if they exercised their legal right to use cannabis. They were also not educated that cannabis can have serious impairing consequences and arriving at work under its influence risks their safety and their coworkers’ safety.

You may think this is an alarmist statement, but unfortunately, it is true. We are all at risk in our communities when we are in cars, on bikes, or even in a crosswalk. That’s because legislation legalizing cannabis has not funded adequate education programs about the dangers of driving under the influence of cannabis. Very few education programs teach drivers it is never safe to drive stoned, just like it is never safe to drive drunk. The lack of education is further compounded by misleading headlines that claim it’s “safer to drive drunk than stoned2.” Some of the articles supporting these headlines will clarify cannabis and driving don’t mix, but most people don’t read the entire article; they just scan the headlines3 on their phones or computers.

The lack of education about the impairing effects of cannabis has caused tragedies in every state. This map of crashes involving cannabis use illustrates what can happen when driving under the influence. The decision to use a mind-altering drug – even a legal one – can have life-altering consequences for anyone, whether driving, biking, walking, or watching a parade.

As we approach the next decade of cannabis reform, we need to find common ground on the importance of education about cannabis use. Employers, community leaders, educators, cannabis reform advocates, legislators, physicians, law enforcement, adults, parents, teenagers, and researchers should all have a seat at the table to determine the best approaches to ensure those who use cannabis legally are doing so fully informed about their decision and are treated fairly both at work and on the roadside.

One thing we have learned since 2012 is that testing breath for cannabis provides objective data about recent use and will help balance SAFETY + FAIRNESS™ in 2022 and beyond. For more information on understanding recent cannabis use and effective testing, check out our CEO Mike Lynn’s blog – ‘A Checklist for Evaluating Breath Technology.’