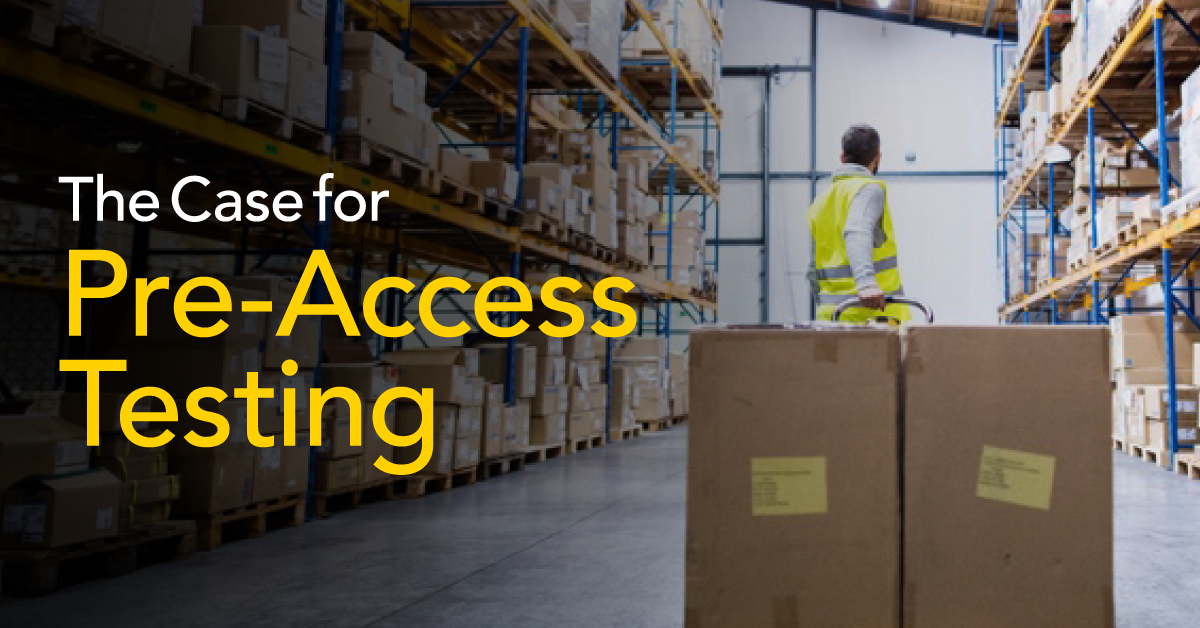 Pre-access testing is flexible, cost effective, and well suited for workplace drug testing programs in the era of cannabis legalization.

As cannabis legalization rolls forward changing the landscape of workplace testing, employers should be prepared to revisit many aspects of their established drug testing programs – especially those that directly relate to cannabis testing. Historically, most employers’ workplace drug testing programs included pre-employment, post-accident, reasonable suspicion, and random testing. Fewer employers have pre-access programs, but in this new world of cannabis testing, these few employers will be joined by more. So, what is pre-access testing and why implement it now?

WHAT IS PRE-ACCESS TESTING?

Employers (whether they are conducting pre-access testing or not) are acutely aware that an increasing number of employees will have access to recreational cannabis use. Many are also beginning to understand that using drug tests that identify past cannabis use that occurred days, weeks, or sometimes months prior to testing is no longer an effective strategy to meet the drug testing program’s goals, nor are these tests fair to the employee. In fact, some new laws – such as those in New Jersey and Connecticut – specifically protect employees from drug tests that measure THC metabolites in their urine, oral fluid, or hair tests. This means that employers need to make several changes to their drug testing programs to test for recent cannabis during the time when it aligns with the peak impairment window.1

These changes include testing for cannabis on-site instead of relying on lab-based tests and using new breath technologies. Since the cannabis impairment window only lasts a few hours, relying on conventional cannabis tests is longer an effective approach. Fortunately, new breath testing technologies were designed to accommodate the short cannabis detection window – they only measure cannabis that has been recently used and results are provided on-location within minutes of collecting a breath sample. The best breath testing technologies are easy to use and allow for lab confirmation if required by company policy.

New marijuana breath testing technology that provides on-location results allows employers who wish to use instant oral fluid or urine testing for other drugs to easily combine technologies. This makes pre-access testing attainable and quick to implement for any employer.

In addition, employers can now more easily test a wider range of employees – not only those in safety-sensitive positions, but also those with access to critical financial information, company trade secrets, consumers’ personally identifiable information, and other sensitive information. This makes pre-access testing an ideal component of any workplace drug testing program in the era of cannabis legalization.

What makes pre-access testing ideal for most employers is that it is flexible and cost-effective. Some safety-sensitive employers may decide to test all employees each time they report for shift, but this does not have to be the approach for all employers. As long as random testing is permitted and employers specify which groups will be tested and how frequently, they can test employees randomly as they report to work, after breaks, or periodically during a shift. Alternatively, employers could decide to test all employees for a certain percentage of shifts or after a certain number of breaks.

New cannabis laws require employers to implement new marijuana testing practices. Fortunately, employers who are eager to continue using workplace drug testing because of its proven effectiveness in preventing drug use at work will find that the adoption of new technology, coupled with modifications to their practices and policies such as pre-access testing, will meet the challenges that these new cannabis laws pose.