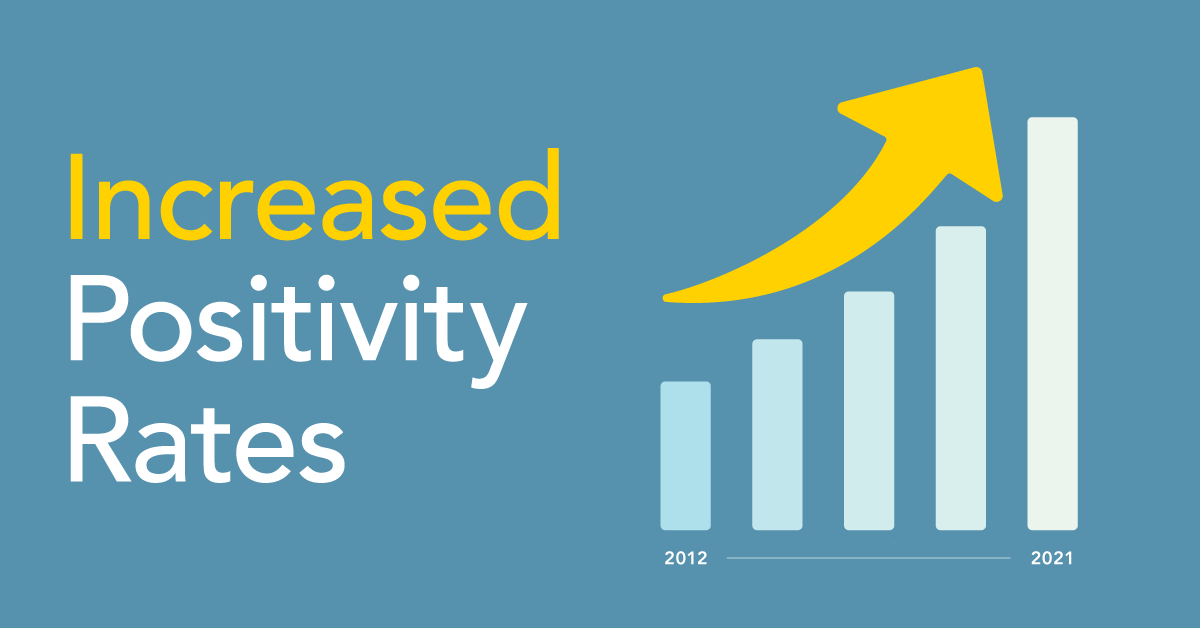 Marijuana Positivity Rates: What Do They Really Mean?

Recent reports indicate that marijuana positivity rates are rising, but is this really cause for alarm?

A recently published report of Quest Diagnostics’ 2020 workplace urine drug testing data indicates marijuana use is on the rise. This is likely to cause alarm for anyone who owns, operates, or works at a safety-sensitive or customer-centric business. Before panicking, though, it’s worth considering what those numbers really mean.

Testing positive for marijuana on conventional tests such as urine indicates that an employee used marijuana at some point in the last day, week, or month prior to testing. There is no way to further analyze the positive urine test results to determine if an employee used cannabis within a few hours of the test and is likely impaired during work hours.

The window of peak impairment after marijuana use lasts only a few hours after a person smokes1, but conventional marijuana tests can return positive results for days, weeks, or even months after a person last used. The recent news articles covering the increase in marijuana positivity rely on positive results from urine drug testing with a window of detection that can last weeks or longer at standard workplace cutoff levels. Upon further examination, the increase in marijuana positivity rates reflects growing acceptance and use of legal marijuana in our country. Keeping in mind that the majority of U.S. adults now have legal access to marijuana, many employers will realize that the increased positivity rates mirror what they are experiencing – more and more qualified candidates and trusted employees are responsibly using legal marijuana outside of work hours – days, weeks, or months prior to testing.

However, these same employers would be alarmed if the increased marijuana positivity rates were due to employees using marijuana during work hours when impairment is likely. Unfortunately, unless employers use a marijuana breath test to specifically isolate recent use, positive results do not provide relevant information about an employee’s likely impairment during work hours.

With increased use of legal cannabis, the increased positivity rates discussed in the recent news cycle should come as little surprise. However, with a tight labor market, employers cannot afford to take action on marijuana tests that indicate positive results long after impairment subsides. If an employer fires an employee who responsibly and legally used cannabis, the action is costly both to employees and their employers. The employee is denied a position or loses a job based on responsible legal use outside of the workplace while the employer incurs the recruiting, training, and other costs to replace a skilled employee.

Some employers, alarmed by the flood of positive test results in combination with the tight labor market, are discontinuing all marijuana testing because they erroneously believe it is their only option. That unnecessary choice poses a different set of risks – primarily safety concerns that can have dire consequences and costs. It is also not a viable solution for businesses where drug testing is mandated by federal law or advised by legal counsel. In addition, some employers work in states where not only the company, but company managers are liable for unsafe working conditions.

Fortunately, employers don’t need to choose between no testing at all and cannabis tests that do not provide data about recent use. New technology that detects recent THC use in breath – where it remains for only a few hours after use – makes it possible for employers to gather both negative and positive results that align with the impairment window of a few hours. Using a solution like the HOUND® MARIJUANA BREATHALYZER helps employers maintain safe workplaces through the detection and deterrence of marijuana use at work, thus allowing them to balance SAFETY+FAIRNESS™ in a tight labor market as well maintain a highly effective risk mitigation strategy. Integrating a cannabis breathalyzer into a company’s drug testing policy also sends a clear message to job candidates that their decision to use legally after work hours will not factor into employment decisions – as a matter of fact, employers won’t even know if a candidate or their employees use marijuana outside of work hours because a cannabis breathalyzer only displays positive results for use within a few hours of the test.

As more and more employers use cannabis breathalyzers to determine whether employees recently used marijuana, the marijuana positivity rates will tell a more complete story. The increase in marijuana positivity in urine drug testing is interesting data but doesn’t provide all the information necessary to understand the impact of legalized marijuana. That’s because the test results don’t distinguish between the increasing number of employees who are legally using marijuana versus those using immediately at or before work. Ultimately, widespread use of marijuana breath testing technology will result in different headlines with supporting stories that will better explain whether increasing positivity rates are a cause for concern or whether they are the expected reality of employees responsibly and legally using recreational cannabis on their own time.