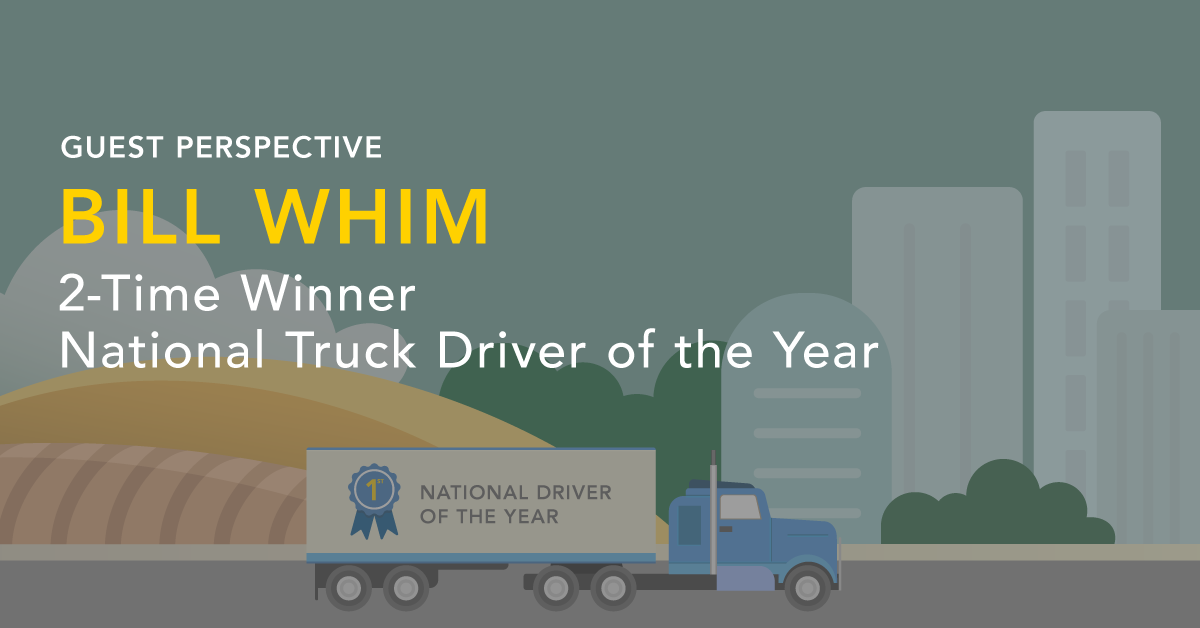 Keys to Safety + Other Lessons from a Life on the Road

A Father’s Day interview with Bill Whim, two-time National Truck Driver of the Year, who logged more than 5 million miles and 50 years of accident-free driving.

Hound Labs’ genesis story has its roots in roadway safety, as described by our founder, Dr. Mike Lynn, in this short video. Upon watching this video for the first time, an instant connection leaped to mind. Bill Whim, my grandfather-in-law and patriarch of our family, spent his career as a truck driver – racking up miles, awards, and safety records along the way. The missions of Hound Labs and Grandpa Bill are so closely aligned that it warranted sitting down and hearing more about Bill’s story.

We sat on his deck on a cool Sunday afternoon early this spring. As we chatted, Bill now 84 had that far-away look in his eyes throughout much of our conversation. His sharp mind had a startling recall of even the smallest details – dates, mile markers, and cities. His passion for the work and the road came through with every story. He’s a man who found his calling young and dedicated his life to becoming arguably the nation’s best truck driver.

Here’s how he did it.

Q: Congratulations on your two wins for the American Trucking Association’s National Driver of the Year. How did it feel to win them?
Thank you. No one had ever done that, so it felt like a significant accomplishment. I won my first one in 1978 with Mid-America Lines, Inc., and again in 2000 with ABF Freight Systems, Inc.

Q: How did you get into trucking?
I was in the fifth grade when I knew I wanted to be a truck driver. I sat by a window at my elementary school in Gallatin, Missouri. The highway climbed a hill outside the window, and I could tell where the trucks were on the hill because of how many times the driver shifted gears.

Q: When you started, what kind of testing did it take to get certified?
For years it was just a chauffeur’s license. Then the government started requiring drivers to have a commercial driver’s license (CDL) in 1992.

Q: What was it like being a driver in the 1970s and 1980s compared to in 2000 when you won your second American Trucking Association’s National Driver of the Year? How did the industry change?
Drastically. You had better equipment like power steering and better brakes. There was also a higher safety standard for drivers. If you ever have an accident that stays on record for your entire life. And a lot of companies don’t want to hire you if you’ve had several accidents.

Q: What factors into winning Trucker of the Year?
Safety mainly. In my 50 years of driving, I never once had an accident. Mostly because I lived by my ‘Four Pillars of Success’ for staying out of trouble.

Q: Your Four Pillars of Success. Can you tell me more?
Yeah, they were my own personal rules that helped me stay safe on the roads.

Q: That’s an interesting angle. It feels like we’re all in a hurry to get where we’re going. I bet that rush leads to road rage and that road rage leads to reckless decisions.
You’re right. I always tried to help the other driver by moving to the shoulder, slowing down, and letting them go by. We all have places to go, but if another driver was clearly in a hurry, I’d let them go ahead. It was never worth an accident.

Q: Speaking of accident avoidance, obviously, no drugs or alcohol before you get behind the wheel, right?
Never. There’s no place for that on the road. Fifty years and 5 million accident-free miles would not have been possible if not for my four pillars, and my four pillars would not have been possible had I driven under the influence. Not all drivers have pillars like I did, but mandatory drug testing certainly helped to discourage bad decisions and risky behavior – in turn helping to keep our roadways safer.

Over his 50 years in transportation, Bill saw a vast transformation of the industry. From the introduction of the Commercial Driver’s License (CDL) to higher safety standards, including monitoring driver records for accidents and introducing drug testing methods.

This evolution continues today, as the Department of Transportation (DOT) requires pre- and post-hiring drug testing for CDL drivers who perform safety-sensitive job functions. This includes testing for THC, as federal laws and policies1 do not recognize the use of cannabis. Recruiting new drivers and retaining drivers has become increasingly difficult as cannabis reform continues. In fact, according to the DOT’s Drug + Alcohol Clearinghouse Monthly Summary Report2, as of April 1, 10,276 commercial truck drivers have tested positive for THC so far in 2022. This is a 32.6% increase year over year in violations from the same time in 2021.3

As Nina M. French, President of Employer + Law Enforcement Solutions, pointed out in a recent blog, “the issue with the CDL requirements isn’t testing for cannabis; it is requiring the use of tests that cannot isolate recent use.”

This blind spot can be addressed by adding a cannabis breath testing solution that detects recent use. With the ability to isolate recent use to the window of time before a driver hops on the road for either a long or short-haul, the transportation industry will be able to expand its candidate pool and make fair employment decisions.

Just as Bill Whim instituted ‘Four Pillars of Success’ to prioritize safety, making him a two-time winner of the ATA National Driver of the Year, Hound Labs believes in promoting roadway safety. Thank you to Bill Whim for his insights and time.