Driving While High: Its Prevalence, Misperceptions, and Impact

With marijuana legalization spreading throughout the U.S., it’s not surprising that marijuana use is on the rise. According to the Substance Abuse and Mental Health Services Administration (SAMHSA), 9% of the U.S. population over 18 years old used marijuana in the past month.¹ In Colorado, where recreational marijuana use has been legal since November 2012, adult marijuana use within the past month is significantly higher — at 16%.²

Using marijuana is a personal choice.  But how often do adults actually get stoned and get behind the wheel? The Colorado Department of Transportation (CDOT) ran an anonymous online survey in early 2018 to get some insights. What it discovered is eye-opening:

Now, this doesn’t mean that 27% of all adult Coloradans are driving under the influence of marijuana each day, just those that use marijuana.  Doing the math, that equates to roughly 5% of the adult population driving high each day — a very significant number. And remember, these numbers are for Colorado only, not the U.S. However, they are certainly a barometer for other states that have legal recreational marijuana use.

Is it illegal to drive high? Yes, it is. But some people don’t think so.  Surprisingly, 27% of parents believe that driving while high is legal in states where marijuana has been legalized. This is only slightly less than the one-third of teens that believe it is legal.6 Even more worrisome, 24% of parents and 32% of teens believe driving while high is totally safe.7 Even those that do recognize the dangers of driving stoned believe that it is less dangerous than driving drunk or distracted from texting.8

Some people even believe that they are safer drivers when high than when sober, claiming that marijuana relaxes them and makes them drive slower and more carefully because they’re aware that they’re high. However, don’t be fooled:  stoned drivers are dangerous. They have reduced decision-making ability and struggle to rapidly and accurately assess risk.9

Researchers have been studying the impact of marijuana on driving ability for decades.  Recent studies, such as the ones by the by the National Institute on Drug Abuse (NIDA)10 and the National Highway Traffic Safety Administration (NHTSA)11 have consistently found that marijuana impairs psychomotor skills, judgment, reaction times, lane tracking, perceptions of time and distance, and cognitive functions.  These studies have concluded that driving under the influence of marijuana is extremely dangerous, and people should not view it as a safer alternative to drunk or distracted driving.

The impact of driving while high 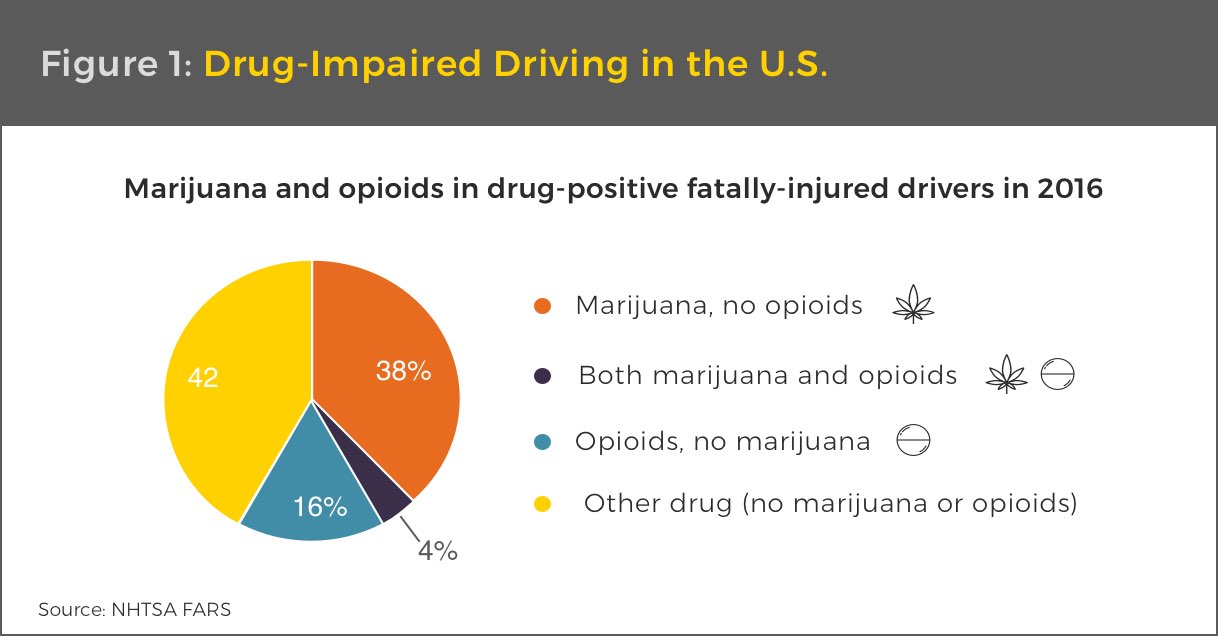 Now let’s take a closer look crash statistics in Colorado, which as you may recall was the first state to legalize marijuana in 2012. Between 2013 and 2016, Colorado witnessed a 40% increase in fatally-injured drivers, according to NHTSA. Drivers that tested positive for alcohol grew 17% between 2013 and 2015. (Note:  2016 figures are not available). Compare that to similar figures for marijuana: the number of fatally-injured drivers who tested positive for marijuana jumped a whopping 145% (See Figure 2).13 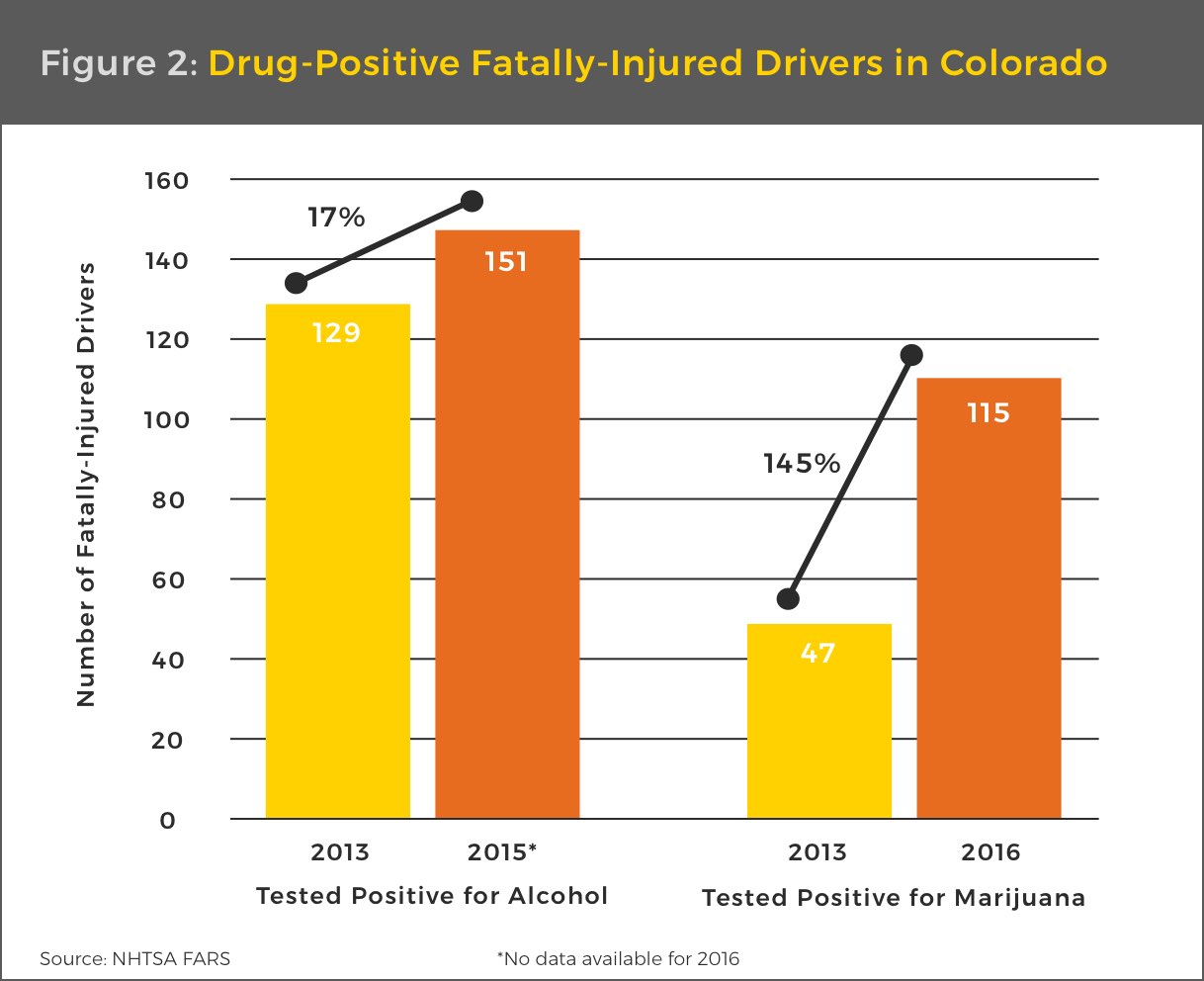 While statistics for the US and Colorado show that marijuana is figuring into more fatal car crashes, it is likely that these numbers are even higher for two reasons.

First, some state laws require coroners to test fatally-injured drivers for marijuana, and others do not. Gaps in the data collected at the state level naturally bias national statistics downward.

Second, existing police protocols have officers stop investigating DUI crimes once they have a minimum amount of evidence that a driver is above the blood alcohol limit (BAC) limit of .08. In other words, officers often do not test for marijuana if they have enough evidence to arrest someone based on BAC levels. As a result, the real impact of marijuana-impaired driving is unknown as many DUI arrests are attributed to alcohol alone.14

Looking at state collision claims provides another indication that driving high leads to car crashes. According to a recent study by the Insurance Institute for Highway Safety (IIHS) and Highway Loss Data Institute (HLDI), the frequency of collision claims per year rose an aggregate 6% following the beginning of retail sales of recreational marijuana in Colorado, Nevada, Oregon and Washington, compared with neighboring states where marijuana is still illegal.15 The study was based on data from January 2012 through October 2017 and took into account relevant pre- and post-retail sales periods for each state.

Why a better marijuana drug test is needed

While most studies indicate a strong correlation between driving while high and increased car crashes and fatalities, the studies themselves are not without flaws.  Drug tests today that analyze bodily fluids — such as oral fluids, blood, or urine — detect THC or its metabolites in a person’s system for up to a day or even weeks after someone used marijuana. This time frame exceeds the time someone is likely impaired.  So while studies show the likelihood of a link between a positive marijuana test result and a car crash or fatality, the tests themselves cannot prove that the person was, in fact, high at the time of the incident.16

This is why a better marijuana test is needed and why Hound Labs has developed the first marijuana breath test. The Hound breathalyzer is the only drug test that detects THC in a person’s breath for up to several hours, which is the same time period in which someone is likely to be significantly impaired from marijuana use. With this tool, a more definitive link between marijuana-impaired driving and fatal car crashes can be established by researchers in further studies.

9 Effects of Marijuana – With and Without Alcohol – on Driving Performance, National Institute on Drug Abuse, Jun 23, 2015.

15 Traffic Fatalities Linked to Marijuana are Up Sharply in Colorado. Is Legalization to Blame?, The Denver Post, Aug 25, 2017.

How Long Can Marijuana be Detected in Drug Tests?

82% of Employers are Concerned about Marijuana Legalization

Testing drivers for cannabis is hard. Here’s why